A honeybee will sting when it perceives a threat to its hive, but when it’s away from the hive foraging, it will rarely sting unless someone steps on it or handles it roughly. And when it does sting, it dies.

A honeybee’s stinger is made of two barbed lancets. When the bee stings, it can’t pull the stinger back out. It leaves behind not only the stinger but also part of its digestive tract, plus muscles and nerves. (see image below right) This massive abdominal rupture is what kills the bee. 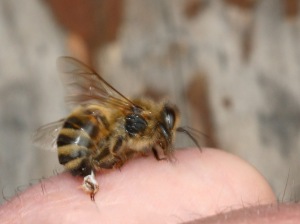 But there’s an advantage for the bees in this. Even after you swat the bee away, a cluster of nerve cells coordinates the muscles of the stinger left behind. The barbed shafts rub back and forth, digging deeper into your skin. Muscular valves pump toxins from an attached venom sac and deliver it to the sting site…. for several minutes after the bee is gone.

If you are stung by a bee and you have a history of severe reactions to insect stings or, if you experience any severe symptoms such as difficulty breathing or, shock, call emergency medical services. Otherwise, determine if the stinger is still present (look for a small black dot at the sting site) and remove the stinger quickly by scraping it with a finger nail or, credit card, rather than pinch it off (the latter will inadvertently squeeze the venom sac & inject even more venom to the site). 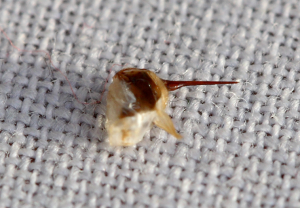 Even a few seconds’ delay in debating how to remove it can have a detrimental effect.

Apply ice or cold packs to the area to reduce the body’s inflammatory response.

Clean the area with soap and water, then apply hydrocortisone cream or, proprietary sting ointment to the site to decrease the severity of the reaction.

Alternative treatments include a paste of baking soda and water.